– to take to or for oneself; take possession of.

– to take without permission or consent; seize; expropriate

And that is exactly what Numero Magazine did when it had the audacity to fling black face on a white model and thrust her in their pictorials. Were they totally ignorant to the idea and saw nothing wrong with it? Or were they merely after publicity?

If it is the former, then shame on them for working in a country that has a more than sizable black population, especially in comparison to the rest of central Europe, where numbers barely register. With so many people of color around, surely someone at this publication could have taken thirty seconds out of their day to investigate before they attempted a stunt this asinine? 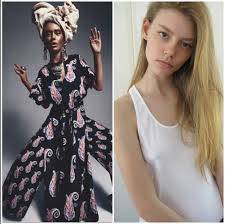 this was from a 2013 pictorial, so obviously not their first time

Or maybe they had zero f*cks to give about any black person or anyone of color, instead preferring to be as racist as they want to be without a care in the world, knowing that in a country such as theirs, very little will come of it other than a mild tap on the wrist?

With France already at the center of a barreling storm when it comes to how minorities are treated within their borders, perhaps it is high time that their people of color reach out and issue a series of verbal SLAPS to this publication and let them know that this sort of behavior is not only inappropriate, but it is not to betaken lightly.

For anyone of color that reads this magazine, take the lead and boycott it and let your revenue speak volumes.

WHY are they blatantly disrespecting the hard work of so many black models that have the talent, drive, and ambition to be the real black model instead of an insulting copy?

This is cultural appropriation at its worst, and Numero Magazine should be ASHAMED!

Contact them here, if only to tell them off for such blatant f*ckery.

Op/Ed: America Is Weary & Weakened By Its Alleged Leader

Duchess Meghan: From HNIC To HRH And Back

Even when my eyes are closed, I am always wide awake. I have not slept …