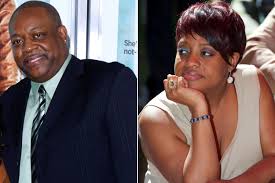 Usually, it’s the fathers battling to run away from responsibility,
but this time, it’s the babymama that’s pulling some Maury Povich-like
drama.

Sherri ‘the earth is flat’ Shepherd, has been battling her soon to be
ex to NOT be listed as the mother of the child that was born through
the surrogate they both decided on before they decided to part ways.

Well, a judge has finally decreed that Lamar Sally, her future
ex-husband AND Sherri are going to be named as the parents on the
birth certificate and raise this babything. That means child support
payments from Shepherd to Sally and the baby finally has someone to
call mama after popping out of a rented hole last August.

Sherri trying to plead her case on Wendy Williams…

Now that he has won in court, Lamar has this to say about Shepherd andthe entire ordeal…

“I want her to go on television and apologize the same way that she
went on there and accused me of being a gold digger and tricking her
into having a baby.”

Let’s pray this baby gets enough hugs growing up!

** support by www.neffmarksman.com **
Share
Previous Kylie Jenner & The Curious Case of Coochella
Next Lori Loughlin to ‘Fuller House’: Where Is My Check?!