The Breakdown: Kuntye & the Curious Case of Sartorial F*ckery

Just when we thought we had gotten enough of these two trick-a-licks, upon further inspection, we see that these two are always up to no good and we are here to call them OUT!

We just covered how Kanye is the bitch that cannot be tamed, and now?

Someone has taken the magnifying glass out and exposed his ‘extra-ness’.

If you thought Kanye was having the most fun playing ‘Dress My THOT’ for Paris Fashion Week, think again. He was not about to go an entire week without throwing in his own special case of sartorial fuckery.

the precursor to cross-dressing Kunnty

Kuntye sashayed next to KimmyCakes the other day and all heads were on her head, so no one really paid too much attention to his high heeled velvet boots, but now that we are doing a bit of fashion rewind to pick the hits and misses, we have seen the light and it sho’ ain’t right!

this cowho is about to catch the serious blues!!

Kanye, leave the boots to the Princess of Pouting & Poontification and try to fall behind and let her be the top ho in the family for a week. You are NOT the Rick James, the Prince, OR the Bootsy Collins! 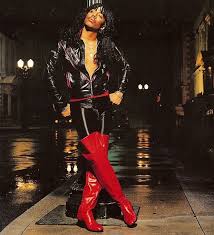 only Sir Rick can pull off boots like that. Sit down, Kunty!

Trick, sit down, have several seats, and DO NOT PASS GO!
EPIC FAIL!