The Como Brothers Band – ‘Baby Steps’ of a Musical Journey 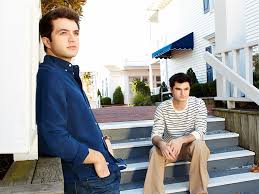 The Como Brothers Band duo of brothers Matt and Andrew Como have quickly gained a footing in the music business, with their unique brand of pop/rock music featured commercially on stations such as MTV, E!, and Oxygen. These two singer-songwriters have earned their chops playing for clubs and festivals in and around the New York area over the last few years. But it was not until 2010 that The Como Brothers Band began in earnest to pursue their musical dreams and in quick succession they are coming true.

With the release of their album Baby Steps, Matt and Andrew are out to prove that their rise is not a fluke, but an attempt to cement their place in the hearts of their fans and the respect of the critics. With their album release set for October 1st, the duo have already given their fans something to satiate their appetites in the interim. The single ‘Late Nights‘ and ‘Straight Face‘ show off their songwriting skills, and they’re touring schedule is picking up all over the New York area. After the success of their EP Still Waters in March of this year, anticipation is high for their full-length album, Baby Steps. The Como Brothers Band are eager to sing and perform their way into the hearts of music fans worldwide.

Fans and new listeners to The Como Brothers Band can check out the links below and get a preview of their pop rock.

** support by www.neffmarksman.com **
Share
Previous The Boston Boys – Keep You Satisfied
Next MonaLisa: They’ve Got the (Back)Beat!